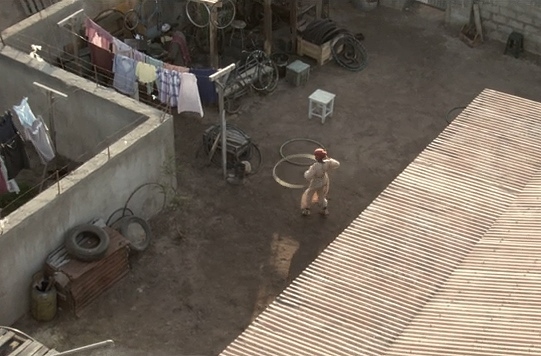 Eye in the Sky and the moral dilemmas of modern warfare

Director Gavin Hood’s new film, Eye in the Sky, places our intuitions about the ethics of war firmly in the cross hairs. And like any decent thought experiment, it asks us to accept a number of artificial constraints, which enable the plot to impale us on the ethical dilemma at its core.

The story is focused on a planned British-run multinational mission to capture a group of high-value Al-Shabaab terrorists, who have gathered in a suburb of Nairobi in Kenya.

The first unlikely element of the story that we’re asked to accept is that there are areas of Nairobi which are under de facto Al-Shabaab control. We must also believe that the Kenyan Defence Force’s highly-trained special forces soldiers would refuse to enter such an area, and that the consequences of them attempting to do so would be “a massacre”.

These (artificially stipulated) elements force a change in the mission from an attempt to capture the terrorists to a kill mission, employing the Hellfire missiles of the US Air Force Reaper remotely piloted vehicle, which is on station above the target.

If we are able to suspend disbelief about these plot elements, then we can appreciate the full effect of this carefully crafted thought experiment about the ethics of war.

The unsettling question at the heart of the film is whether or not killing a group of dangerous terrorists, who are on the cusp of launching a deadly suicide attack, justifies taking the life of an innocent little girl who has set up a stall selling bread outside the target house.

Director Hood toys with us as the film unfolds, offering and then withdrawing hope that the dilemma might be avoided. But ultimately it must be confronted.

The principle of discrimination (or “distinction” in legal terminology) requires that only enemy combatants may be directly targeted in war. In the law and ethics of war there is, though, an acknowledgement that doing so may unavoidably result in the foreseeable, but unintended, deaths of noncombatants.

The accepted way to evaluate whether the predicted deaths – or “collateral damage”, as they are euphemistically called – are allowable is known as the “doctrine of double effect”. This requires us to apply the following four-step test:

There’s little doubt that in the military scenario described in the movie (which, coincidentally, is very similar to a scenario I use to illustrate the doctrine of double effect in a recent book on military ethics) the test is comfortably passed.

This is even if we don’t entirely buy the claim by the mission’s operational commander, Colonel Katherine Powell (brilliantly portrayed by Helen Mirren), that the suicide bombers’ vests could kill as many as 80 civilians.

When the White House legal advisor (Homeland actor Laila Robins) joins the fevered debate taking place in the UK Cabinet Office Briefing Room and essentially makes this point, most viewers are probably as uncomfortable with the conclusion as the sweating British politicians who are desperately trying to avoid taking responsibility for the decision to launch the missile.

It would be a mistake to see this as a film that is narrowly about the ethics of employing armed drones as weapons of war. Hood could just as easily have put us in the same dilemma if the target had been under surveillance by a “Mark I Eyeball” rather than a sophisticated camera circling 25,000 feet above the ground. And the quandary would be no different if the means of killing the terrorists were an old-school airstrike involving a skillful pilot and an unguided “dumb” bomb.

What the near-future technological capabilities on display do bring to light – unsettling as they undoubtedly are – is that such systems allow for a degree of precision and discrimination that would have been impossible in past conflicts. This is something we should welcome.

Thus while Eye in the Sky deftly raises a range of topical issues in military ethics, ranging from civil-military relations to moral injury, at its heart it is a thought experiment designed to draw out our intuitions about the military application of the doctrine of double effect.

While the utilitarian calculation at the heart of the dilemma is straightforward, by causing us to fall for the lovable little girl who could end up as an “unintended casualty”, Hood forces us to give up our detached perspective – our moral eye in the sky, if you will – and confront the tragic reality that lies behind the computer-generated “collateral damage estimate”.

Going further, this is a test of our intuitions about the morality of war itself, for the fact is that collateral damage is an unavoidable reality of war and will remain so for the foreseeable future. That’s something neither we, nor our politicians, should ever forget.