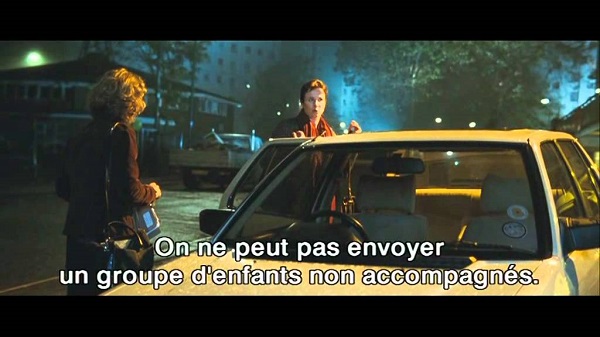 The film is based on the true story of Margaret Humphreys, a social worker from Nottingham who uncovered the scandal of « home children », a scheme of forcibly relocating poor children from the United Kingdom to Australia and Canada.

Margaret reunites estranged families, who are situated in Australia and the U.K., and brings worldwide attention to the cause.

Deported children were promised oranges and sunshine but they got hard labour and life in institutions such as Keaney College in Bindoon, Western Australia.

Many were given to the Congregation of Christian Brothers where they were repeatedly raped.

Oranges and Sunshine is a Australian drama film directed by Jim Loach as his directorial debut and stars Emily Watson, Hugo Weaving and David Wenham, with a screenplay by Rona Munro, based on the book Empty Cradles by Margaret Humphreys.

Jim Loach’s sombre, painful film packs a hard punch; harder than you’d expect from the soft-focus poster. Emily Watson plays Margaret Humphreys, a Nottingham social worker who made it her mission in the 1980s to investigate the postwar scandal of child deportation. Children in care were literally transported – like criminals from a bygone age – to Australia, there to be kept in children’s homes. Many were (falsely) told their parents were dead and often brutally abused in places similar to Ireland’s Magdalene laundries, particularly in a place called Bindoon, run by the Christian Brothers in the remote bush south of Perth. In the burning sun, Bindoon looks like something akin to Castle Dracula. Loach’s film shows how Humphreys’s controversial intervention triggered something like the retrieval of a repressed collective memory. There are excellent performances from Watson, from Hugo Weaving as a gentle, damaged soul and David Wenham, a truculent ex-Bindoon boy who makes an unlikely common cause with Humphreys.