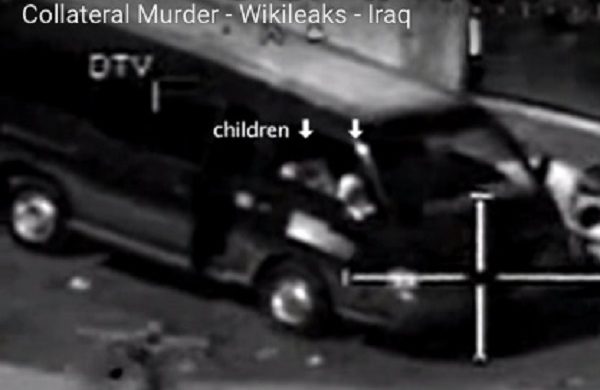 5th April 2010 10:44 EST WikiLeaks has released a classified US military video depicting the indiscriminate slaying of over a dozen people in the Iraqi suburb of New Baghdad — including two Reuters news staff.

Reuters has been trying to obtain the video through the Freedom of Information Act, without success since the time of the attack. The video, shot from an Apache helicopter gun-sight, clearly shows the unprovoked slaying of a wounded Reuters employee and his rescuers.

The newly released video of the Baghdad attacks was recorded on one of two Apache helicopters hunting for insurgents on 12 July 2007. Among the dead were a 22-year-old Reuters photographer, Namir Noor-Eldeen, and his driver, Saeed Chmagh, 40. The Pentagon blocked an attempt by Reuters to obtain the video through a freedom of information request. Wikileaks director Julian Assange said his organisation had to break through encryption by the military to view it.

In the recording, the helicopter crews can be heard discussing the scene on the street below. One American claims to have spotted six people with AK-47s and one with a rocket-propelled grenade. It is unclear if some of the men are armed but Noor-Eldeen can be seen with a camera. Chmagh is talking on his mobile phone.

Sign up to the Media Briefing: news for the news-makers

One of the helicopter crew is then heard saying that one of the group is shooting. But the video shows there is no shooting or even pointing of weapons. The men are standing around, apparently unperturbed.

The lead helicopter, using the moniker Crazyhorse, opens fire. « Hahaha. I hit ’em, » shouts one of the American crew. Another responds a little later: « Oh yeah, look at those dead bastards. »

One of the men on the ground, believed to be Chmagh, is seen wounded and trying to crawl to safety. One of the helicopter crew is heard wishing for the man to reach for a gun, even though there is none visible nearby, so he has the pretext for opening fire: « All you gotta do is pick up a weapon. » A van draws up next to the wounded man and Iraqis climb out. They are unarmed and start to carry the victim to the vehicle in what would appear to be an attempt to get him to hospital. One of the helicopters opens fire with armour-piercing shells. « Look at that. Right through the windshield, » says one of the crew. Another responds with a laugh.

Sitting behind the windscreen were two children who were wounded.

After ground forces arrive and the children are discovered, the American air crew blame the Iraqis. « Well it’s their fault for bringing kids in to a battle, » says one. « That’s right, » says another.

Initially the US military said that all the dead were insurgents. Then it claimed the helicopters reacted to an active firefight. Assange said that the video demonstrated that neither claim was true.